A book club feature is something that I’ve been working on introducing for a while. As I mentioned in last Friday’s post, I spend a lot of my free time reading up on various aspects of things that you could loosely term ‘vintage-related’. I created the My Vintage Life feature to help introduce a bit more of that sort of content here – alongside all of my continuing posts about sewing, of course! However, it’s also important that I get to have a conversation with all of you. And what better way to do that than through a book club?! I’ve always been an avid reader – I actually ran a book blog, long before I created Sew for Victory, and I’m currently training to be a high school English teacher. So bringing together my love of reading and my love of all things vintage seemed like an excellent step!

The Sew for Victory Book Club is going to focus on reads that have something to tell us about those various components that we associate with the word ‘vintage’ – so it might be a book about a particular era, person, or event. I’m also hoping to get a good mix of fiction and non-fiction. Largely, the Book Club is going to reflect whatever I’m most interested in at that moment in time. But I’m also open to suggestions – so send any book recommendations my way through a comment, email (laura@sewforvictory.co.uk) or tag @sewforvictoryuk on Instagram or Twitter. Typically, I’ll be using social media to point you towards whatever book I’ll be posting about that month. Since this is the first post, however, I’m going to dive right in with April’s selection – Zelda by Nancy Milford. 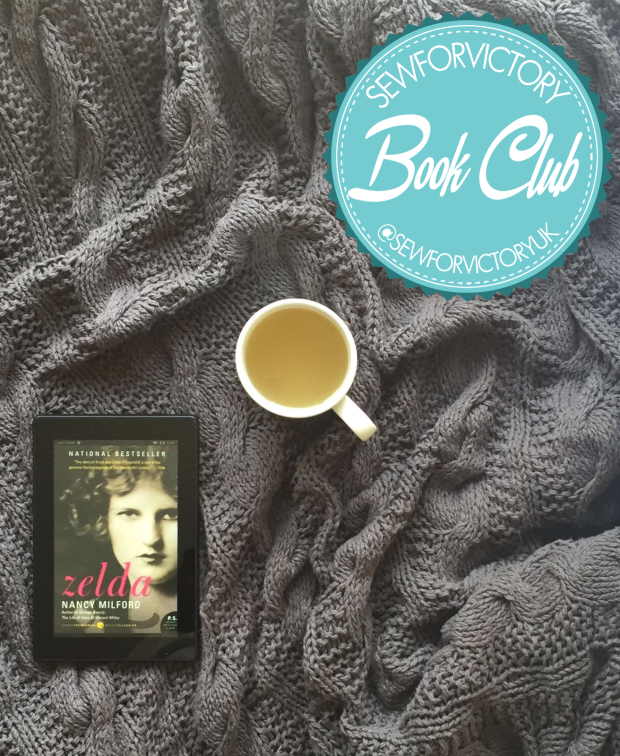 I picked out this book for April because it seemed quite timely to me, both in terms of the blog and popular culture more generally. Zelda Fitzgerald, wife of author F. Scott Fitzgerald, has recently seized the collective imagination with renewed vigour. A TV series about her life, as well as a couple of upcoming films, mean that Zelda is very much a part of contemporary public consciousness. For my part, I recently threw myself into stitching up a 1920s storm with the Baltimore Dress from Decades of Style. Since I have a hard time separating fashion from the larger historical context in which it emerged, I obviously threw myself into learning more about the ’20s. It was perhaps inevitable that I would find myself enthralled by the woman termed the ‘first American flapper’ by her husband.

By this point, I’ve read a couple of biographies of Zelda Fitzgerald. Nancy Milford’s is not, in my opinion, the best or most thorough. But it is accessible in length (quite a bit shorter than the alternatives at 464 pages) and remains incredibly well researched, despite being written back in the 1970s. The book offers a detailed account of Zelda’s life – her childhood in the South, her marriage to Scott Fitzgerald, and her tragic encounters with mental illness. The book gains most of its authoritative weight from the many interviews conducted by the author with people who knew the Fitzgeralds. Nancy Milford also had access to many diaries, letters, and manuscripts written by the couple.

Most interesting about Zelda is the depth that it gives to a woman who has become almost caricatured by popular culture. Few people haven’t heard of Zelda Fitzgerald. Those who have typically identify her with the ‘flapper’ lifestyle – drinking, partying, indulging in sexual promiscuity. While Zelda’s role in the development of the flapper is undeniable and her partying with Scott is legendary, there is so much more to this very three-dimensional woman than general knowledge would suggest.

Zelda and Scott on the cover of Hearst’s International Magazine (1923).

The biography tracks Zelda throughout her life. From her early years as a southern Belle in Montgomery, Alabama, to her first meeting with Scott in 1918. Milford describes Zelda’s daredevil approach to life and her total fearlessness. This lines up with what we know of Zelda following her marriage to Scott Fitzgerald in 1920 – the complete abandon with which they appeared to live their lives in New York, cast in the role of popular celebrities following publication of Scott’s first novel This Side of Paradise. Their wildness put them in the spotlight on a constant basis, making them the near total embodiment of what Scott Fitzgerald would himself term ‘the Jazz Age’. Milford does a great job of depicting this period, as well as the ensuing trips to Europe.

Where the book has a tougher time, however, is in relating the facts of Zelda’s mental illness. Zelda was, according to the book, diagnosed with schizophrenia while the couple were still abroad in Europe. It is this diagnosis that would follow Zelda throughout her life, back to the US, and into a number of institutions. Undoubtedly, there was something incredibly troubling in Zelda Fitzgerald (other sources suggest that she more likely suffered from a form of manic depression). Nancy Milford describes Zelda’s struggles with asserting her own identity in the face of Scott’s success – her attempts to write and, subsequently, to become a professional ballet dancer in her late 20s. It was while committed to an excessive and obsessive programme of dance training that Zelda had her initial ‘breakdown’ and was institutionalised. However, Milford’s biography has suffered criticisms of censorship. In Sally Cline’s biography of Zelda – Zelda Fitzgerald: Her Voice in Paradise – Cline suggests that Zelda and Scott’s only child, their daughter Scottie, was vigilant in her attempts to keep certain pieces of information out of earlier biographies. According to Cline, Scottie – despite giving her permission for the publication of Milford’s book – actively requested that certain parts of it be removed.  Cline also indicates that she had to work hard to obtain access to medical records previously restricted to researchers.

The extent to which Milford’s biography was censored is uncertain. However, it is clearly the case that – since the book’s publication in the 1970s – a new degree of accessibility to Zelda’s life and a renewed interest in her legacy have emerged. Milford’s biography introduces us to a fully realised and, at times, intimidating portrait of Zelda Fitzgerald. We get to see Zelda the tomboy, Zelda the beauty, Zelda the author, Zelda the painter, Zelda the wife, and Zelda the mother. In none of these capacities is Zelda unflawed or completely accomplished. Instead, Milford shows each of these separate identities as an individual site of turmoil for Zelda. In Milford’s portrayal, these separate facets of Zelda’s personality cumulatively dwarf the comparatively short time that Zelda spent in New York as Zelda the flapper. Instead, we end up with a picture of Zelda as a truly multifaceted and multitalented woman – a women who worked relentlessly to establish her own identity, separate from the almost domineering narcissism of her husband. This battle was one into which her struggles with mental illness would ultimately enter and was a battle that would, sadly, end without resolution.

Zelda (1920) in a knickerbocker suit that outraged people in the South.

There is obviously so much more to this story than I am describing here. If you have any interest in the 1920s, whether literary or lifestyle, I would highly suggest picking up Nancy Milford’s biography of Zelda Fitzgerald. It will undoubtedly shake up any preconceptions you have about the woman so infamously associated with the Roaring ’20s. While the biography will likely never escape accusations of censorship – and should be read with appropriate scrutiny because of this – it still stands up as an incredibly well-researched and well-written account of a woman who so defied social conventions. After finishing Zelda, I was left with a truly unexpected appreciation for this heroine of popular culture. It is fitting that, as she spent her life searching for an identity and a legacy, Zelda Fitzgerald would be a figure who, almost 70 years after her death, we would be relentlessly seeking to understand and claim as our own.

If you want to get hold of a copy of Zelda by Nancy Milford, it’s available on Amazon UK and Amazon US I bought mine on Kindle. Sidenote: the Kindle version isn’t great. There are lots of typos and formatting issues with separating quotes from the body of the text. If you can purchase a paper copy, I would recommend it!

If you’ve read or plan on reading the book – or just have some general thoughts – add a comment to the post. I’d love to hear from you!

A new apartment means a new sewing room! I’ve been without a creative space for a good few months and yearning for a place to once again park my sewing machine. Beyond providing some (often very necessary) inspiration and motivation to sew, being surrounded by my creative tools is one of the principal ways in which I’ve found a sense of grounding. This new apartment is the fifth place that I’ve lived in 2.5 years. While I’m no stranger to moving and have been doing so roughly every two years since I turned 16, this latest move has been a shock the system for many reasons. Still feeling relatively adrift here, having a space to pursue my passions is a massive part of how I’ve managed another life-altering transition. All of this to say that I’ve posted a sewing room tour on Sew For Victory - featuring plenty of pics and a whole lot of ruminating on why this sewing space is the best I’ve ever had (thank you Target!! #notsponsoredbutiloveyousomuch). Click the link in my bio to have a read/look! . . . #sew #sewing #sewcialists #sewcialist #sewingroom #creative #creativity #sewingblogger #blog #books