Well it’s been a while, my friends! Over six months since I last posted and about the same length of time since I last touched a sewing machine (I know, it’s almost sacrilegious!). As those of you who have been following me for a while would have likely sensed, life got a little tumultuous toward the end of 2018. I was approaching a year and a half in the US, grappling with the fact that I still hadn’t really established any foundations for myself in this new place, and continuing to struggle in various ways with my mental health. I’ve always been advocate of the ‘take what you need, leave what you don’t’ approach to life and, at the time, sewing became less and less of a priority. This was, in large part, a result of an increasingly difficult living situation (anyone who has experienced the joy of nightmare neighbours will empathise) and a desire to be basically anywhere but my apartment. Enter six months of life changes – we moved out of our place and into my in-laws. I took the time to work through my own challenges and focus on the things that were making me feel good. Absent any available sewing space, however, writing on Sew For Victory felt a little redundant. Fortunately, my husband and I finally found a new apartment that we love, moved in, and I now have a designated sewing space back (which is not only perfectly proportioned but, most importantly, incredibly quiet). I’ve been getting stuck back into the projects that have been on hiatus for months and thought that it was about time to bring my attention back around to Sew For Victory.

I’ve missed you all and am so incredibly grateful to those of you who have remained around and been checking up on me. It’s been a challenging few months and certainly a lesson in the fact that, more than anything, progress is never linear. I know that I’ll be sharing more on this over the coming weeks, particularly as I work to reestablish the habits and routines that have been so important to me over the past few years. But I wanted to take this opportunity to stop in and let you all know that something approaching ‘normal service’ will resume again next week. We have so much to catch up on and I’m truly looking forward to chatting with you all again!

In the meantime, here’s a sneak peek of my The Little Prince-inspired Rosie skirt (taken from Sew Over It’s Rosie dress pattern) – a make that I finished up a year ago and never got around to posting or reviewing. I’ll be doing a long over-due pattern review in the next couple of weeks so look out for that. This photo is stolen from my other endeavour – The Book Habit – where you can catch more of my writing, as well as find me on Instagram posting about all things book-related. So, if that’s your jam, you can also check me out there! 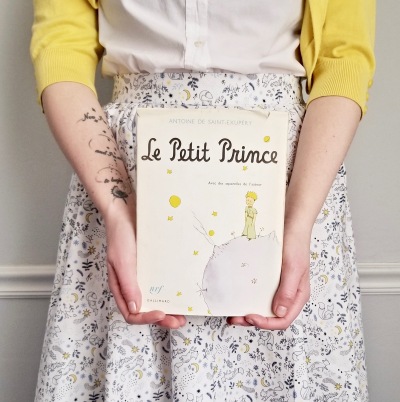 14 thoughts on “Still Alive And Back To Sewing!”

A new apartment means a new sewing room! I’ve been without a creative space for a good few months and yearning for a place to once again park my sewing machine. Beyond providing some (often very necessary) inspiration and motivation to sew, being surrounded by my creative tools is one of the principal ways in which I’ve found a sense of grounding. This new apartment is the fifth place that I’ve lived in 2.5 years. While I’m no stranger to moving and have been doing so roughly every two years since I turned 16, this latest move has been a shock the system for many reasons. Still feeling relatively adrift here, having a space to pursue my passions is a massive part of how I’ve managed another life-altering transition. All of this to say that I’ve posted a sewing room tour on Sew For Victory - featuring plenty of pics and a whole lot of ruminating on why this sewing space is the best I’ve ever had (thank you Target!! #notsponsoredbutiloveyousomuch). Click the link in my bio to have a read/look! . . . #sew #sewing #sewcialists #sewcialist #sewingroom #creative #creativity #sewingblogger #blog #books